Happy Birthday to an author who led a short, but brilliant, life and left us with an infamous character.
by Hunter Murphy

John Kennedy Toole was such a funny man. A comic genius, in fact. His friends, enemies and admirers all commented on his scathing wit and uncanny ability to mimic people, a characteristic that served him well when creating his most famous character, Ignatius Reilly.

In “A Confederacy of Dunces,” Ignatius Reilly is an oaf of a man who oozes hysterics: 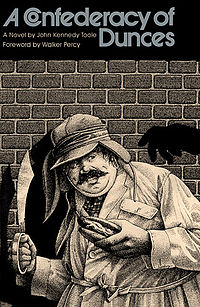 “Is my paranoia getting completely out of hand, or are you mongoloids really talking about me?”

On the occasion of Toole’s birthday, it would be impossible NOT to talk about Ignatius Reilly. Reilly was both high minded and low-browed, an ingenious mix of many sensibilities. He hated the modern era and found himself railing against it regularly:

“What I want is a good, strong monarchy with a tasteful and decent king who has some knowledge of theology and geometry and to cultivate a Rich Inner Life.”

Reilly even fancied himself something of a literary man.

“I am at the moment writing a lengthy indictment against our century. When my brain begins to reel from my literary labors, I make an occasional cheese dip.”

Part of the charm, the ridiculousness of Reilly is absolute total state of arrogance:

“Stop!’ I cried imploringly to my god-like mind.”

His life-sized bronze statue on Canal Street in front of the old D.H. Holmes department store (pictured at top) has been called one of the ten literary landmarks to see in New Orleans by Frommers and is also included in the Deep South Literary Trail App.

Reilly’s work ethic, for lack of a better word, is also comic. He himself gives a reason for his attitude toward employment:

“Employers sense in me a denial of their values … they fear me. I suspect that they can see that I am forced to function in a century which i loathe.”

“I avoid that bleak first hour of the working day during which my still sluggish senses and body make every chore a penance. I find that in arriving later, the work which I do perform is of a much higher quality.”

He has very little to be arrogant about, which is part of the reason we laugh both with and at Reilly.

“A green hunting cap squeezed the top of the fleshy balloon of a head. The green earflaps, full of large ears and uncut hair and the fine bristles that grew in the ears themselves, stuck out on either side like turn signals indicating two directions at once. Full, pursed lips protruded beneath the bushy black moustache and, at their corners, sank into little folds filled with disapproval and potato chip crumbs. In the shadow under the green visor of the cap Ignatius J. Reilly’s supercilious blue and yellow eyes looked down upon the other people waiting under the clock at the D.H. Holmes department store, studying the crowd of people for signs of bad taste in dress.”

Reilly is deeply concerned with his many physical ailments, most notably his valve, which he believes is ever on the brink of closing up for good. He believes his valve teeters on constriction because of the absence of “proper geometry and theology” in the modern world.

“The Dr. Nuts seemed only as an acid gurgling down into his intestine. He filled with gas, the sealed valve trapping it just as one pinches the mouth of a balloon. Great eructations rose from his throat and bounced upward toward the refuse-laden bowl of the milk glass chandelier. Once a person was asked to step into this brutal century, anything could happen.”

While serving in the Army in Puerto Rico, miles and miles from his hometown of New Orleans, Toole started writing “Confederacy of Dunces” on a borrowed typewriter. Below he’s pictured during the time he wrote the first draft of his masterpiece. The book of course won a Pulitzer Prize and still attracts a sort of cult following, with new readers discovering the genius of Toole each year.

I interviewed author Cory Maclauchlin, who wrote the first legitimate biography of Toole, “Butterfly in the Typewriter.” Months later, Maclauchlin visited Deep South’s home base of Lafayatte, Louisiana, to discuss the town’s significance to both Toole and Confederacy.

In Lafayette, Toole met some of his closest friends while working at University of Louisiana Lafayette, including Dr. Pat Rickles and her family, as well as Bobby Byrne, one of the real-life characters Toole used to create his most famous fictional character.

“By far the most memorable and monumental specimen of eccentricity who left an indelible impression on Toole was Bobby Byrne, a mustached medievalist, tall and burly with dark hair. He lived in a little cabin behind the house of a fellow professor, where he played his harp, his viola de gamba, and a harpsichord he had custom made in England. As an avid devotee to Boethius, he assigned The Consolation of Philosophy to every class he taught, even freshman composition.” – “Butterfly in the Typewriter”

John Kennedy Toole was born today in 1937 and died on March 26 in 1969. The story behind Toole’s life is as fascinating as any in the 20th century. This year, he would have only been 75 years old. Even though he’s gone, his characters will live on so long as books are read.

Hunter Murphy has written two novels for which he’s currently seeking representation. He is a Southerner who lives in Birmingham, Alabama, with his partner of many years, his mother-in-law (a feisty senior citizen who continues to tell him tall tales), and an English bulldog, who is a tough critic. Find out more about Hunter in our Contributors section or email him at hmurphy1976 (at) gmail.com.

The Lafayette Confederacy
New Orleans Would Have Its Bard Yet

The Soul of New Orle